The COVID-19 pandemic will damage the global economy and likely impact business value for the remainder of 2020. While there is no way to know how long a possible recession will last, we may consider the Great Recession as a benchmark for conditions that will prevail over the coming months. In this installment of CTBK’s Cornerstone series, we discuss the outlook for sectors that are expected to be hit hardest by COVID-19. We also analyze merger and acquisition (M&A) activity among private companies during the Great Recession to understand the environment business owners and potential buyers may expect to face in the near future.

The Great Recession officially lasted from December 2007 to June 2009 in the United States, but economic growth remained sluggish for years after the recession had technically ended.1 By comparison, the present crisis is expected to be much shorter in duration, and the economy is expected to recover more quickly than it did following 2009 based on its underlying fundamental strength.2

A more appropriate comparison in terms of duration may be the Spanish flu recession of 1918-1919, which lasted 9 months and, during which, 675,000 deaths were estimated in the United States.3 COVID-19 will not likely claim as many casualties as the Spanish flu, and an aggressive response from governments and central banks may prevent a recession in 2020 from lasting as long as 9 months. Preliminary data from China show that national economies may begin to recover after just one quarter.4 However, Goldman Sachs expects U.S. GDP to contract by 3.8% in 2020 on an annual average basis.5 The Goldman Sachs forecast calls for the contraction to peak in April and weaken over the rest of the year.

It is a critical distinction that the Great Recession was driven by underlying economic weakness, while a COVID-19 recession would be driven by external public health concerns. Furthermore, the Great Recession reflected weakness in certain sectors of the economy, whereas the current public health crisis is anticipated to impact nearly every sector. However, there will likely also be many similarities: conditions will resemble similar situations in the past when consumers paused spending and businesses suffered from a collapse in demand.

The Outlook For Sectors Impacted by COVID-19

The severity of a possible recession will differ significantly by sector. Businesses that rely on travel and face-to-face interactions with customers will be hurt the most, while those producing food and basic necessities may benefit from the crisis. Businesses can primarily be hurt in two ways: (1) supply chain failures and/or (2) lack of demand due to travel restrictions, social distancing, government-mandated closings, etc.6

Supply chains have become increasingly complex since the Great Recession, and losses related to supply chain issues are more difficult to forecast. Losses related to travel restrictions and social distancing generally flow from regulations intended to limit the spread of COVID-19. These effects may begin to reverse immediately when such regulations are eventually lifted. Moody’s has published a heat map of sectors based on their level of exposure, as shown in the table below. Industries that depend on travel and discretionary spending generally have the greatest degree of exposure. 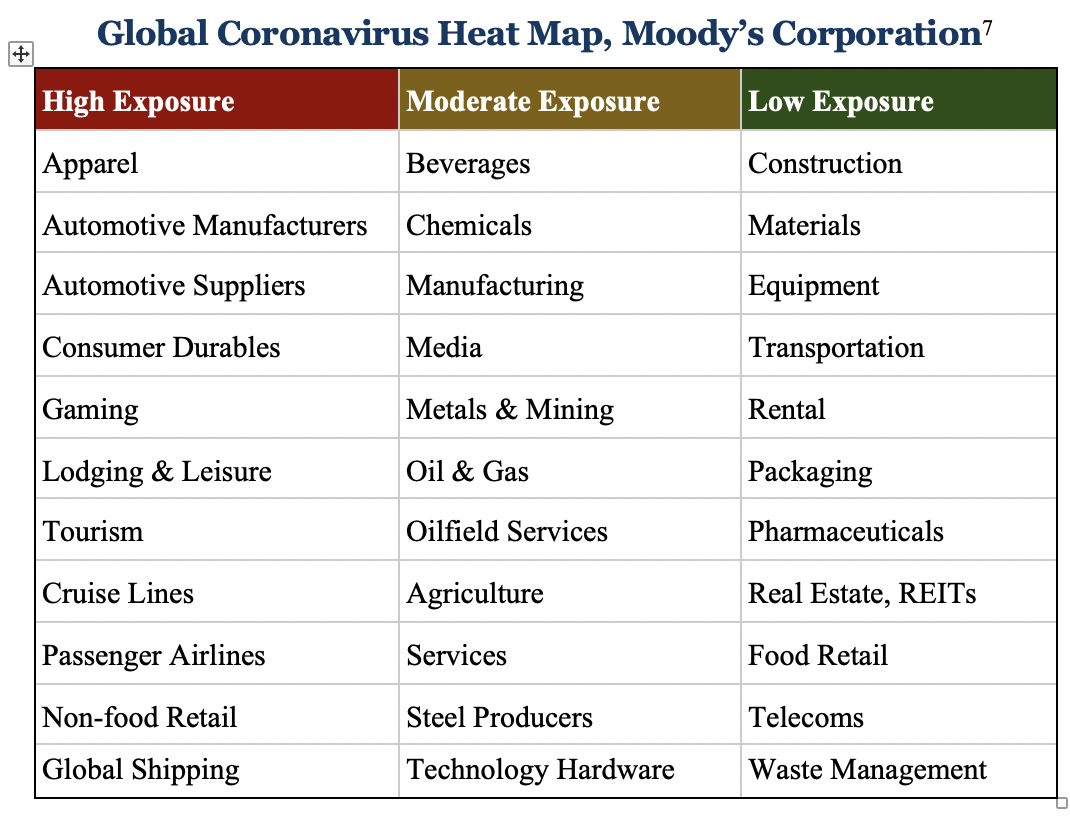 IBISWorld has also published forecasts for industries with a high degree of exposure. As shown below, protective equipment and disinfectant producers are expected to benefit the most, while businesses related to travel and tourism are the most at risk. Across all industries, smaller establishments may have greater downside risk and less upside potential because they are less able to absorb demand shocks and capitalize on short-term demand spikes, respectively. 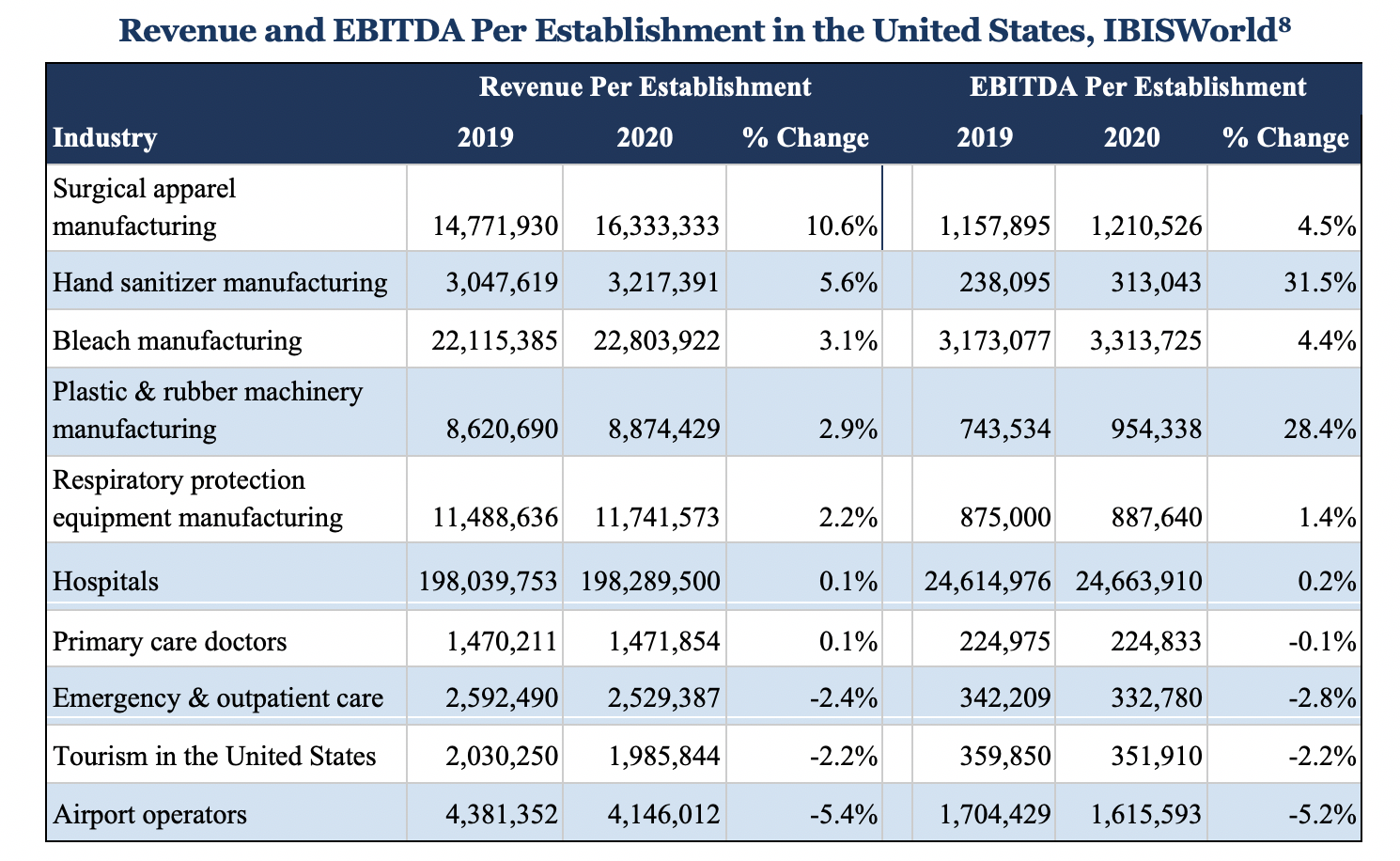 The Outlook for M&A and Business Valuation

While the Great Recession and a possible COVID-19 recession are fundamentally different in their causes, their impact on public capital markets and valuations appears to be similar at the time of this writing. Transactions involving private companies are often not reported until well after they have closed; therefore, the impact of COVID-19 on private capital markets and valuations remains to be seen. However, during the Great Recession, deal value (the total volume of transactions) and valuation multiples (the price paid in a transaction per dollar of earnings) contracted in both private and public markets. A comparison of private and public deal value and valuation multiples is shown below. 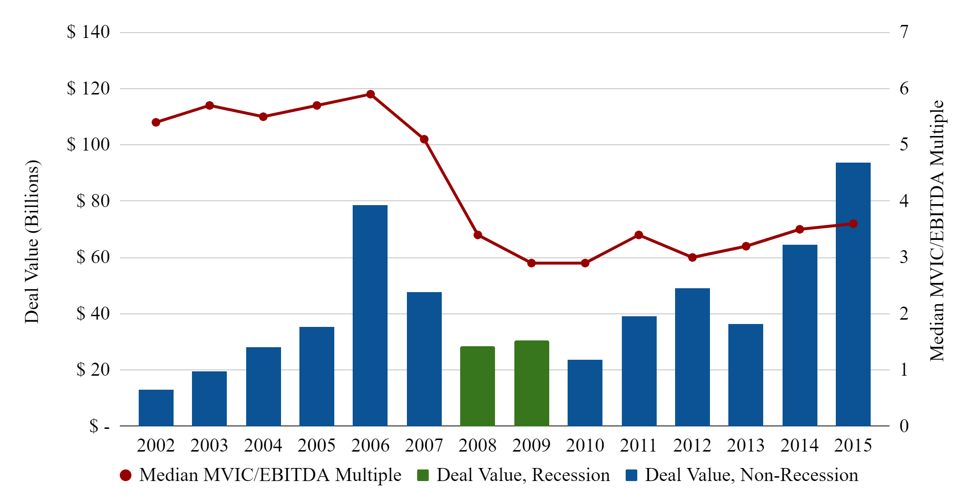 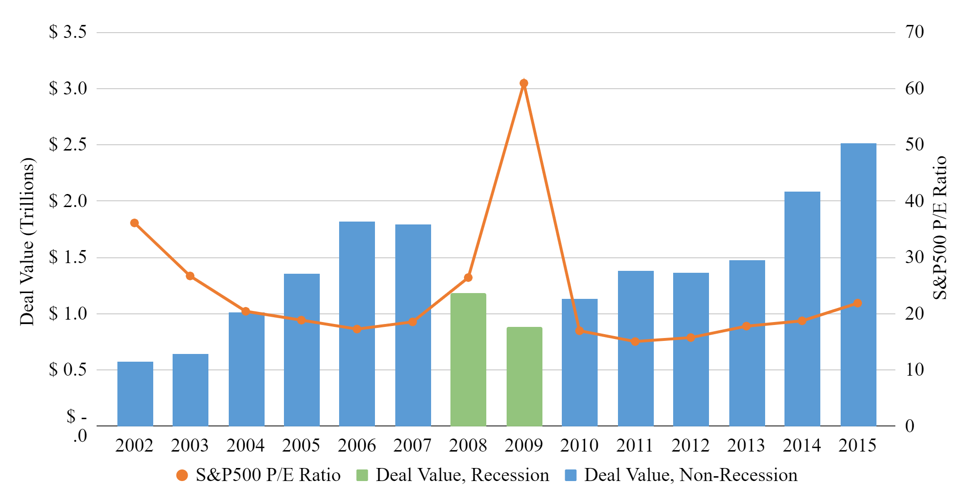 Private deal value saw a significant decline in 2007 which was not duplicated in public markets until 2008. Private capital markets also lagged the public markets in their recovery - public deal value returned to pre-recession levels in 2014, while private deal value did not fully recover until 2015. We may infer that investors in private capital markets are ahead of their public-market peers in acting before a recession, and behind them in acting once a recession has taken place.

Given that investments in private companies are less liquid and such positions are generally held for years, this is not surprising. Private-market investors’ relatively long holding periods lead them to act more slowly than public-market investors, which is often beneficial in uncertain environments.11 A 2018 study backed by Harvard University found that private equity portfolio companies were particularly resilient during the Great Recession, due in large part to their managers’ longer-term view. The financial press has reported for some time that private equity firms have amassed $1.5 trillion in cash ahead of the next recession, and have recently begun to initiate deals in the industries most affected by the crisis.12

While this trend may not be surprising, it does indicate that COVID-19’s downside impact on private companies will persist long after the public markets have recovered. Prior to the Great Recession, the median EBITDA multiple observed in private company transactions hovered between 5 and 6, and has never recovered to that level since. Between 2013 and 2019, the median EBITDA multiple generally remained between 3 and 4, with peaks above 4.5 in certain quarters.13

Additionally, not all sectors were affected equally during the Great Recession. Deal value in most sectors evaporated, while financial services experienced a nine-fold increase. At the same time, the median EBITDA multiple in financial services acquisitions plummeted from approximately 10 in 2007 to 3 in 2009, as distressed companies were acquired for a fraction of their pre-recession values. This may be the best approximation we have for the near-term future of industries affected by COVID-19. Private deal value and valuation multiples for all sectors, and for financial services in particular, are shown below. 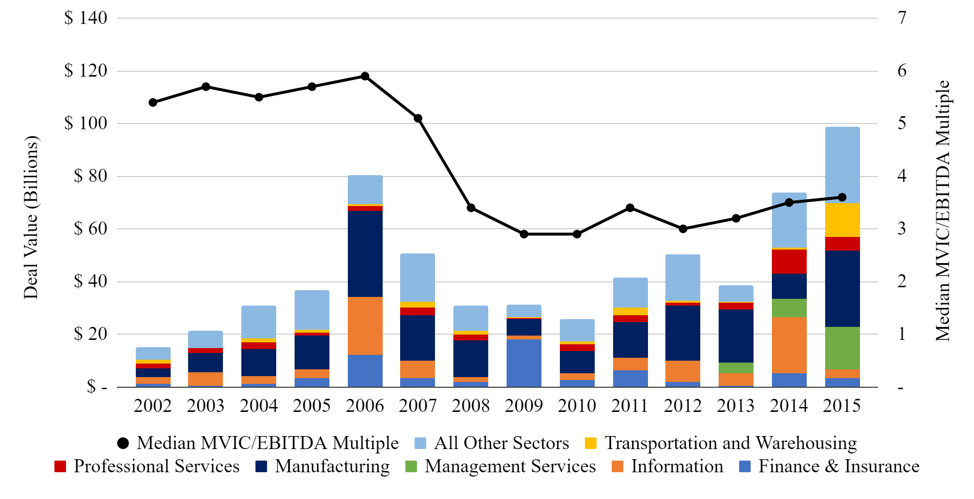 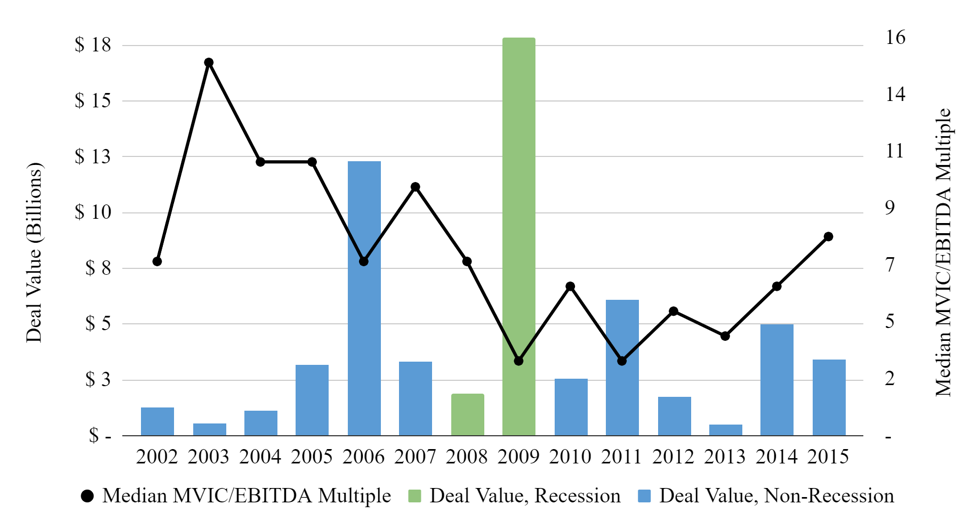 The 2009 explosion of discounted financial services acquisitions may occur now in the sectors hardest hit by COVID-19. Private equity firms have already begun to initiate deals in travel, entertainment, and energy, and have stockpiled $1.5 trillion in cash for exactly this type of contraction.16 Meanwhile, Goldman Sachs has warned clients that hostile takeovers and shareholder activism will increase due to collapsing valuations.17 In a memo issued to clients, Goldman Sachs recommends implementing shareholder rights plans, colloquially known as “poison pills,” to defend against investors hunting for cheap equity in a crisis.

As previously discussed, private deal activity and valuation trends generally mirrored the public markets during the Great Recession, with a significant lag in recovery time. If this relationship holds true in 2020, private business owners in affected industries will face steeply discounted valuations this year and for some time after the wider market’s recovery. Those who sell (or are forced to sell) their companies may find themselves in a buyer’s market, with relatively little bargaining power in negotiations. Under these circumstances, the fundamental drivers of business value will be more important than ever to achieve favorable exit prices.

On the other side of that coin, private equity firms can hope to fare much better in 2020 than they have in recent years. As shown below, Pitchbook data indicate that funds launched during the Great Recession achieved higher internal rates of return (IRRs) than those launched in any of the four years leading to 2008. 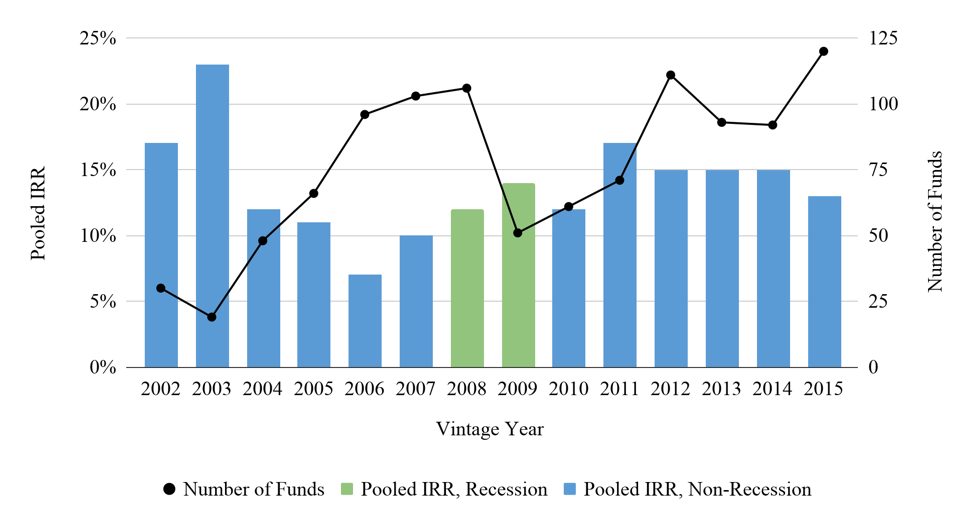 The acceleration of IRRs following 2010 may have been driven by the availability of capital due to quantitative easing and other Federal Reserve interventions, which intensified between 2011 and 2014.19 Therefore, a comparison of funds with vintage years during and after the Great Recession may not be appropriate given that financing conditions had changed significantly by the 2010s. Nevertheless, the experience of private equity firms in 2008 and 2009 suggests that their $1.5 trillion in cash can be deployed to achieve IRRs greater than those seen in recent years.

The Great Recession was fundamentally different from the current economic crisis surrounding COVID-19. Because the anticipated recession in 2020 will be caused by external public health concerns rather than underlying economic weakness, the United States will likely recover more quickly than it did following the financial crisis. Businesses that rely on travel or in-person transactions will suffer as long as restrictions on movement and social interaction remain in place. Those involved in fighting the spread of infection will likely benefit as long as the virus remains a threat.

What the Great Recession and a possible COVID-19 recession may have in common is their impact on businesses most affected by their underlying causes. The Great Recession was triggered by the financial crisis; as a result, privately-held financial services firms were acquired at EBITDA multiples which were 70% less than pre-recession multiples. Whether or not the same spike in deal activity and decline in deal multiples will be observed in sectors like tourism and hospitality this year depends on a wide range of factors. Governments at all levels and the Federal Reserve have moved aggressively to ease the financial impact of the virus, with mixed reception, while private equity firms have begun to seek out deals in the hardest-hit sectors.

For business owners hoping to exit their companies in 2020, or during the next several years, the primary drivers of business value are more important than ever. Strong relationships with customers, a differentiated product or service and a proven history of growth will create value for owners in any market, even one defined by uncertainty surrounding COVID-19.

[5] Goldman Sachs Now Says US GDP Will Shrink 24% Next Quarter Amid the Coronavirus Pandemic - Which Would be 2.5 Time Bigger Than Any Decline in History, Markets Insider, March 20, 2020.

[8] EBITDA is defined as earnings before interest, taxes, depreciation and amortization.

[12] Private Equity Eyes Industries Crippled by Coronavirus: ‘They Have Been Waiting For This’, CNBC, March 25, 2020.

[16] Private Equity Eyes Industries Crippled by Coronavirus: ‘They Have Been Waiting For This’, CNBC, March 25, 2020.